My greatgrandfather Jens Bjørn: Founder of the green bears.

Johanne Poulsen married Peder Bjørn on the 16th of July 1859 in Dalby church. Since they could not have their own farm on Fynen they went to Mausing to get a place of their own.

The year after the 5th of July their oldest child Jens was born. We do not know if anything happend to him before the summer he turned 14. But at that time he went to live with his mothers brother in Hersnap. He prepared to be confirmed with the monister Boisen and was confirmed on the 4th of October 1874.

Jens served as a soldier in Fredericia and learned about dairying at Jebjerg Dairy. He was a pupil at Sinding, Testrup and Askov Folkschools.

In april 1890 Jens left for Bendena, Kansas Lars was with him in Bendena but when he actually arrived we do not know. He is not listed in the emigrantfiles. But when Jens writes home to his brother Hans in August 1891 to wish him happy birthday and with a plea to send them the local Silkeborg newspaper Lars is living close by. The two of them went home together for christmas 1891.

In January 1892 Niels Jensen from "Fladbjerggaard" dies and his daughter Kirstine was now left alone. Jens and her had already been fond of eachother before he left for the U.S but her father did not want them to have eachother. Jens stayed back for this reason and instead Marie and Hans returned to the U.S with Lars.

Kirstine and Jens were married in October 1892 and Jens took over the farm where she was born; "Fladbjerggaard". He ran it until 1920 where his sons Niels and Peder took over while Kirstine and Jens moved to a smaller property in Pederstrup.

Jens was like his brothers an eage gymnast and was after taking a diploma he was head of gymnastics in Mausing for a couple of years.

Kirstine and Jens had 7 children: Niels, Johanne, Kathrine, Peder, Thora, Jenny and Bodil. Bodil died at the age of 2 1/2 and Thora 18 years old.

Their first grandchild my mothers brother Jens was actually born before my grandmother Johanne was married to my grandfather Marius. This was supposed to be a secret from the people of Mausing. Therefore Kirstine and Jens went to Silkeborg to buy things for the baby to send directly to Fynen but unfortunately people from Mausing were also to be found in Silkeborg that day. Hence the secret got out.

Jens died in 1938 so he was dead when I was born. Kirstine died in 1950 just three days after my first birthday, but she has probably never seen me because we lived on Fynen.

In memory of my grandfather I never met. Hanne Bjřrn

Poul.Bjørn.1865 (pink bear)
Poul Bjorn and Eline Andersen married 12. july 1890 in her home in Salby by pastor Boisen and just after they emigrated to Iowa where some of her family lived. 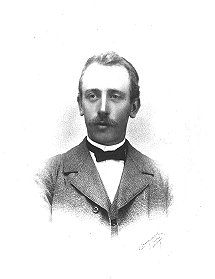 FOUNDER OF THE BLUE BEARS

Niels Bjørn was born 10.august 1875 in Mausing (Denmark) as the little brother. He had four older brothers and one older sister.

Niels and his brothers were very good gymnasts. As a young man he was working on a farm in Fyn. Niels returned to Jutland, and when he was 19 years old he brought himself a farm - Ørumgaard - 29.jan.1895.

Niels married Ane Nielsen on 4. november 1898. Together had five children: Johanne, Petra, Laura, Carl and Arne. Ane died very young - 38 years old 26.march 1909. It was a terrible situation for Niels Bjørn and with five small children, he had to get a good housekeeper. Marie Laustsen took care of house and children.

Proberly because of a bail for a friend - things vent wrong. The friend vent bankrupt - and as a guaranter Niels Bjørn had to pay the bill. Niels Bjørn had to sell Ørumgaard, but he kept some land, on wich he build up a small farm Maardalsgaard. It was in 1906. In 1918 he sold Maardalgaard and his family moved to Hårby near Skanderborg. He had bought a small farm in Hårby the same year.

But Niels Bjørn got sick, and he had to sell the farm in Hårby 14.july 1922. By help of Johanne Bjørn they bought a small house in Ørum in 1925. Niels got more and more sick, but he had a great patience. He never made complaints because of his sickness.

As a young man he joined an agricultural school and he had a great interest for new things in the world. He did not smoke - and would never drink alcohol.

Niels Bjørn died 26 of may 1939 after many years of sickness. At that time I lived with my grandfather and grandmother in the white house in Ørum - and I still remember, when they laid my grandfather in a wood boks. It was just the day before my birthday ---

In memory of my grandfather - Niels Bjørn - a good man.